Ever since my first visit to DisneySea Tokyo, I have grown a great fondness for Disney theme parks. It is not so much about the rides (they are not the most thrilling as they are more family friendly), but it just evokes nostalgia. Also, I’m always impressed by their attention to details, especially along the queue lines !

Check out my previous post on my ultimate guide to beating the queue at DisneySea Tokyo !

Last month, I went to Disneyland Paris, and managed to cover both parks, i.e. Disneyland Park and Walt Disney Studios, 2 parks in 1 day, with plenty of time to walk around and explore both parks.

I must say this first, as disclaimer, I believe covering both parks in a day is ONLY possible for adults, AND without children. The reason is because I didn’t do any of the kids attractions, e.g. Meet Mickey Mouse, Princess Pavilion etc. The queue for all these are crazy more than an hour !

Walt Disney Studios, on the other hand, has less Mickey Mouse magic. The setting is more like production sets. The attractions showcase more on the technologies used in production effects, animations, theatrics etc. Walt Disney Studios is where you’ll find Ratatouille, Rock ‘n’ Roller Coaster starring Aerosmith, as well as the infamous Tower of Terror.

Considering you will be staying until the closing of Disneyland (Yes, 2300 hrs in summer) for the MUST SEE Disney Illuminations show (you CANNOT MISS THIS !), I recommend to,

Sharing you this Youtube link of the complete Disney Illuminations show in 4K resolution, if you need some convincing to stay, otherwise don’t watch it and spoil the surprise.

You want to buy your tickets in advance, to save at least 20 EUR per ticket ! Buying your tickets on the spot will cost you 87 EUR (1 park 1 day), 107 EUR (2 parks 1 day). Prices may change depending on season, click here to official website.

To buy your tickets in advance, you can get them from,

3. Visit the Official Disneyland Paris website, and select the attractions you want to cover

I strongly recommend to go through the attractions list on the Official website, to select and prioritise the rides you want to cover. Take note also which rides are closed for maintenance.

I will shortlist the attractions I want to do, and categorise them by Must-do(s), and Optional(s).

You REALLY MUST WATCH the Disneyland Illuminations show ! The moment the first song played (A dream is a wish your heart makes), I had goosebumps all over me ! It was really emotional ! I don’t want to give it away, but you CANNOT MISS IT !

Having gone through this mental model exercise, it will definitely help save a lot of time, especially if you are not travelling alone – minimise time discussing and arguing on what to do next, where to go etc.

Unlike Universal Studios theme parks, there is no option to pay for an Express pass in Disneyland theme parks. Instead, you queue for a FASTPASS (only on popular attractions).

On FASTPASS attractions, you will see two queues, i.e. Standby queue (which is the normal queue until you get your turn), and the FASTPASS queue (where you will get a FASTPASS with a designated time period printed on it). 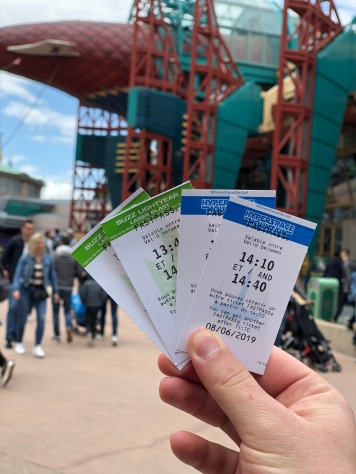 Read more about FASTPASS in my DisneySea Tokyo guide.

Tip : You want to also take note of Single Rider lines and make use of it if you don’t mind doing those rides alone.

Some final tips before I share my 2 parks in 1 day itinerary,

If you are staying to watch the Disney Illuminations show (which YOU MUST), you want to standby in position at least 30 minutes before show starts, to get the best view – As advised by one Disneyland fanatic friend, the best spots are to the sides (either in front of the sound control booth to the left, or next to the popcorn stand on the right). Yes, you may not get centre-centre view of the castle, but you won’t be missing anything. In fact, being in the centre-centre, you may end up struggling with camera phones or kids on daddy’s shoulder blocking your view. There are some slightly higher terrains at the sides which helps a lot with the view !

TL:DR – It is possible to cover 2 parks, i.e. Disneyland & Disney Studios in 1 day, provided you skip all the long queueing younger children attractions.

As you can see, I didn’t queue more than 35 minutes for most rides, except for Star Tours (55 minutes). And I did it as a filler before my FP #2 Buzz Lightyear allocated time, as I didn’t want to be wandering elsewhere and having to rush back to Discoveryland.

So, there you go ! I hope this post answers all your questions and doubts on whether it is possible to cover both parks in one day. I did it, so you can do it too ! =)

Jeremy is an engineer turned economist. Outside work, he is known as Jerm.

Jeremy works hard, but Jerm plays harder. Jerm loves traveling and hopes to finish pinning every city on his map. Jerm also enjoys cooking and eating, and dreams to one day open his own petit restaurant.

Jerm hopes to inspire especially working professionals, that you all too can travel the world whilst keeping your full time job.

There was an error retrieving images from Instagram. An attempt will be remade in a few minutes.